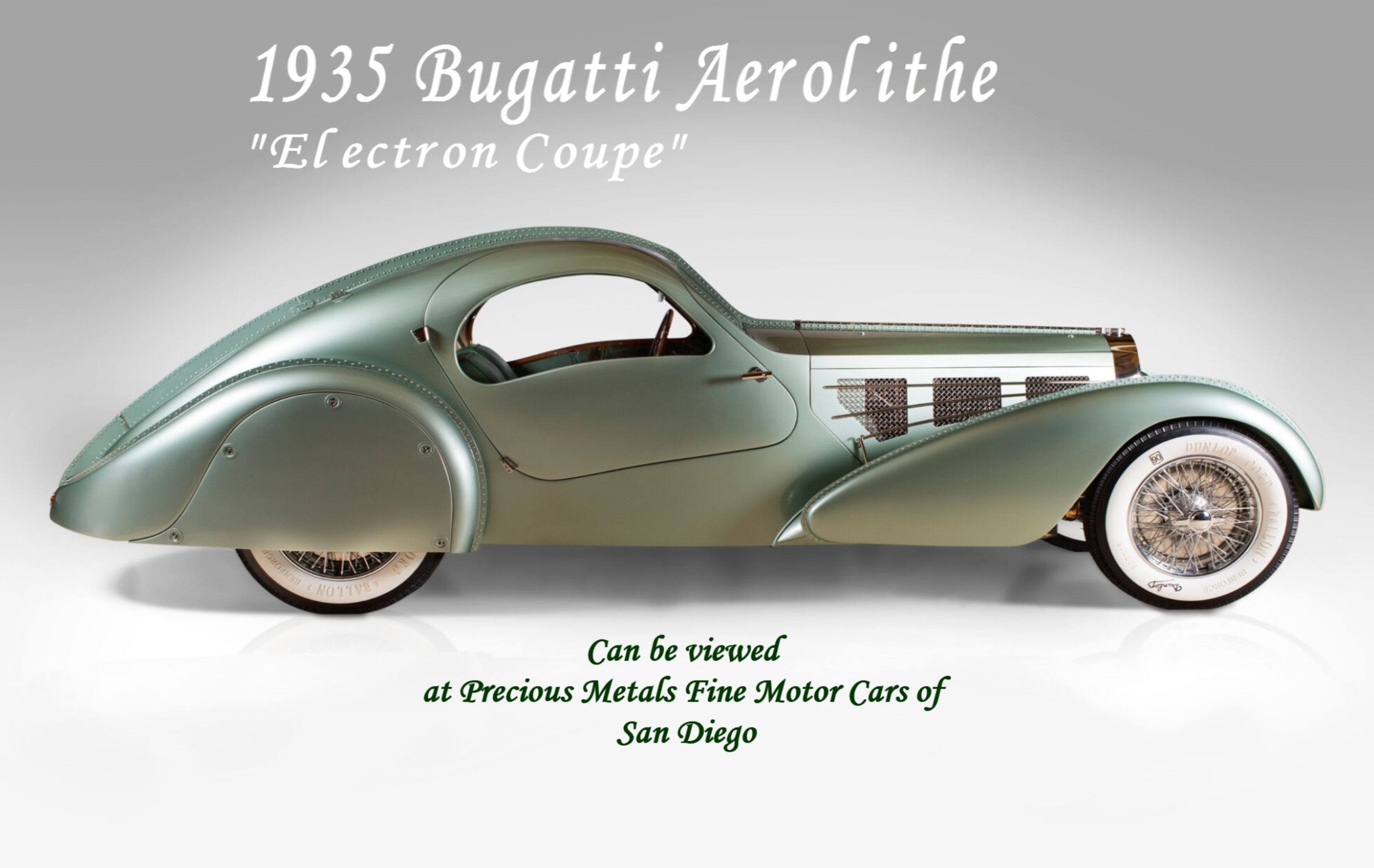 This is the Bugatti Aerolithe hand Built out of Magnesium by The Guild of Automotive Restorers. The original Aerolithe was a One-off Bugatti Prototype for the Paris Show of 1935. Utilizing the earliest known type 57 Chassis #57104 the Guild Hand Built this new construction to exact scale as the original using only original and authentic Bugatti Components. This painstaking build was featured on their show Restoration Garage and was finished in the same method as the original with only era correct fabrications. From just 14 photographs the car was designed and built over a period of 7 years and survives today as an exact scaled version of the 1935 Bugatti Aerolithe. Numerous articles, features and videos have documented the new life of this amazing vehicle. Since 2010 the Bugatti Aerolithe has traveled the world and has been exhibited at a variety of museums and showcased to some of the most exclusive venues, gaining international recognition the vehicle was invited to Dubai, UAE in one of its earliest showings to unveil itself to the world, it has received top honors as the International car of the year, has been shown at a few concours including Quail Motor Sports Gathering and Amelia Island Concours 2013, Most recently the car attended Rodeo Drive Concours for Fathers day 2019 was shown by us at Precious Metals Fine Motor Cars of San Diego and received the most Elegant Vehicle Award, the vehicle is now displayed in our showroom and can be viewed any time by contacting us at (619) 515-2220 or email us at sales@pmautos.com.

Built as an engineering marvel in 1935 for the Paris Show the Bugatti Aerolithe was the first of its kind with tear drop design and a radical riveted exoskeleton, in following years these features spawned the creation of the Bugatti Alantics of which we believe 3 possibly 4 were built! these cars were constructed out of Aluminum but also received this lovely coachwork. Those 3 cars are considered some of the most expensive cars in the world with the last one trading reportedly in the 40 Million Dollar range, residing in hands of prominent collectors such as the renowned fashion designer Ralph Lauren, and Peter Mullins of the Mullin Museum, the Atlantics reign supreme in car collecting superiority. Following suit with rarity, style, speed and performance the Bugatti Royals of which 6 were built also fetch considerable dollars as do type 57 SC Atalante. This type 57 Bugatti Aerolithe also joins the list as one of the Most expensive restorations ever created, with the body being hand built out of Magnesium the car took over seven years. Necessitated many years of research and the tracking down some virtually unobtainable parts. Its is one of a kind!! although several people have tried to re-create this exclusive group of cars no one has ever hand built one out of Magnesium with the same components as the original or undergone the painstaking choir of building the vehicle to scale. This Bugatti Aerolithe by The Guild of Automotive Restores is truly the only one of this nature. The vehicle now resides in San Diego, Ca with Precious Metals Fine Motor Cars of San Diego.

We invite you to visit with us in San Diego to tour our showroom of vehicles, glance at the Aerolithe, or set an appointment to discuss the vehicle in detail we are open 5 days a week and at your service. Please take a moment to view these videos of the process from the owner and build teams, also a few videos are included of several interactions with the car.

History of the 1935 Bugatti Aerolithe

The One and Only Bugatti

Shipping of the Bugatti Aerolithe